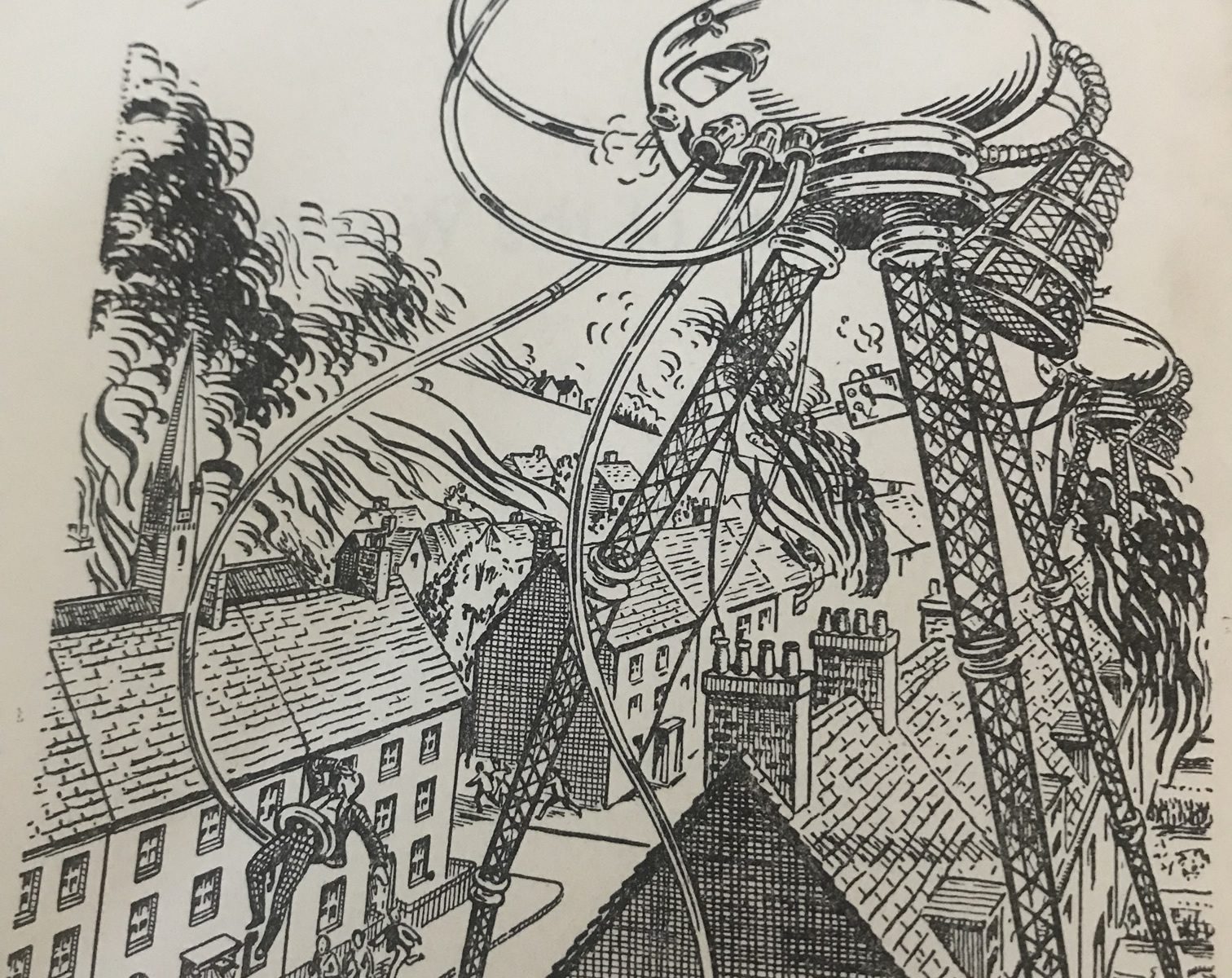 This is, of course, an old chestnut and there are a lot of reviews of this book, so I am not going to do a full write-up, just a personal note on what it means to me.  The photo at the head of this article is the inside cover of my 1960 Heinemann/New Windmill Edition and I can not count the times I have thumbed through it over the years.

It is one of the books that people think they’ve read, or haven’t bothered to read as there are many many many adaptations; 2 films from 1953 and 2005, the amazingly effective radio show, the musical versions and a TV series, plus a massive amount of pop-culture references.  The reality is, of course, very different.  Written in 1895 and published in 1897 as a magazine serial, the book is a sparse, haunting, fatalistic account of the invasion.

I believe you have to take into account the time a book was written, this was late Victorian England, twenty years before the First World War, life expectancy was 48 in the UK, the motor car was only 10 years old, Britannia’s empire stretched across the globe and the English in particular had optimism about continuing good times ahead.  Against this background, Wells’ book takes a dark look at the futility of fighting the more technically advanced Martians.

So, the language is archaic to the modern reader, the references are out of date, but the story really is timeless.  When the first cylinders land, the initial reaction is curiosity and not fear, after all Woking and Chobham are Middle -England, prosperous areas.  People have time to have a look and see what’s happening.  “It seemed so safe and tranquil“, which of course does not continue for long.  I love that an “enterprising sweet-stuff dealer in the Chobham Road had sent up his son with a barrow-load of green apples and ginger-beer“.  Today, this would be a hot-dog van, mobile bar and, before long, social media selfies.  This is insular, the newspaper comes out that evening, already out of date.

The later adaptations do get the futility part of the situation right, which is just as well as its really the point of the book.  When the first Martian attacks the crowd surrounding the pit by using the “heat ray”, which gets its own introductory chapter, our narrator says simply “Had that death swept through a full circle, it must inevitably have slain me in my surprise“.  The point I am trying, inexpertly, to make is that to the modern reader, the language flows beautifully and almost meanders across the story.  Measure this against the popular adaptations, even the radio show and it is glacial in progressing the story.  The entire book is only 55,000 words, just beautifully crafted.  Most popular Science Fiction has fast language, excitement or awe on every page, this one really does not.

Instead, fear.  It cycles through curiosity, analysis, futility and finishes with bewilderment.  Take a moment and read (or re-read) this book, I said at the start of this ramble that I would say what this book means to me and here it is.  Context.  Great Science Fiction reflects the times, especially its insecurities.  I love the old 1930’s to 1950s Golden Age Science Fiction where the future was exciting, the 1970s where external threats were on people’s minds, the 1980s were positive again, and so on.  War of the Worlds is the earliest Sci-Fi I have come across that starts in that frame.  England had it all in 1895, empire, technology, unrivalled military strength and above all, complacency.

The idea of this proud nation being defenceless against superior forces must have been shocking at the time and that’s what I get from it.  Horse drawn artillery being applauded by crowds lining the streets turns into complete destruction of the same by the end of the day.  That must have been revolutionary, shocking to a public used to winning.  Measure this against the impact the first viewing of Alien or Independence Day, or the first reading of the Martian Chronicles or the Dangerous Visions anthology and it fits right in.

Its relevant today, while the original is set in home-counties England, it is fitting that the adaptations are set  largely in the USA, the current superpower questioning its supremacy.  Thats where we are…

You can buy this book on amazon at