The stories in this anthology follow the adventures of “Ijon Tichy”, the Penguin Modern Classics version is a translation by Michael Kandel.  The translator deserves a mention as there are a lot of mnemonics, puns and poems etc., which must have made the job a challenge.  It’s carried out with charm, humour and, as far as can be seen, a genuine affection for the character.

If you’re concerned about taking the leap to an author you’ve never heard of, Lem also wrote (among other crackers) Solaris, the George Clooney version of the film in 2002 being the third try to get it on film.  He is noted as being the most successful  Polish writer with 22 million books sold, plus many plaudits, awards and adaptations.  Links to lists of these will be below.  He grew up in occupied Poland (first Germany, then Russia) and it was only after 1956 and the “Polish Thaw” that he was able to publish work without it going through the Russian censors and having anything satirical or politically dubious removed.

The result is a joy to read, 12 short stories which were written over 20 years starting in 1954.  Lem’s stories are funny, unexpected, farcical, painful and twisted, although in a very clean, naïve, 1950s sci-fi kind of way.  No character is uncouth in the “Star Diaries” worlds, physics is pretty much ignored and the solutions to the silly situations “Ijon Tichy” finds himself in are often farcical, lateral thinking events.  There are times the story gets distracted by silliness, not for long, then it zips back to normality.  This gives the book a genuine free-wheeling feel, its not a treadmill and its not signposted as to where the individual tales will go.

The stories are Ijon’s recollections of his adventures, first hand, direct and with the kind of roaming sentences that you would expect from a grandfather talking to a child.  Lots of diversions, irrelevant details, reasons and internal conversations are detailed.  I keep thinking it feels like Sherlock Holmes with a sense of humour, or perhaps Olaf Stapledon’s “Star Maker” with a lot more fun.  Either way, not many short story anthologies actually make me chuckle out loud as often as this does.

You can get this book at Amazon on this page

In the order of the book, the short stories are:

The Seventh Voyage
After his ship is damaged, Ijon falls into an area of “time vortices”, after each vortex is hit, different versions of him from a day or so in the future appear to help or hinder the repairs.  It gets complicated.  Arguments ensue.

The Eighth Voyage
Ijon is Earth’s delegate  to the United Planets, will he find something nice to say about his own species so we can join?

The Eleventh Voyage
Ijon goes undercover to solve the mystery of what has happened on a planet where a mad ships computer has set up a robot based human-hating colony.

The Twelfth Voyage
Ijon is lent a “time dilator”, lands on a planet and with it turned on, watches the local people evolve in a few days, not always the way he’d like.

The Thirteenth Voyage
Ijon goes in search of Mr OH, known for solving entire civilisations problems.  While visiting places who have been “helped” by Mr OH, Ijon discovers the long term effects.

The Fourteenth Voyage
Ijon visits a planet to go hunting “squamp”, without knowing anything about the prey or the people there.

The Twentieth Voyage
A future Ijon returns and forces the current Ijon to become head of an organisation “fixing” history.  It does not go well.

The Twentieth Voyage
After being rescued from wild furniture by the Demolition Friars, Ijon experiences life in a secret order.

The Twenty Second Voyage
Having left his pen-knife on a planet by accident, Ijon realises he doesn’t recognise which one.  He goes hunting.

The Twenty Third Voyage
Ijon visits a tiny world where the people have themselves temporarily disintegrated overnight to save space.

The Twenty Fifth Voyage
Ijon visits several planets while trying to catch up with a friend, missing him each time but turning the trip into a tour.

The Twenty Eighth Voyage
During an endlessly long voyage, Ijon recounts his family history and questions whether they (or he) exists.  Indeed, is he moving at all?

You can find more information about the author and the book on these links.
Stanislaw Lem – Wikipedia
The Star Diaries – Wikipedia Surprisingly, there are two sides to the Barbican.  The China House has recently been renamed the Miller and Carter, given a polish up and looks really nice inside.  The food is as good as always (recommend everything!), but the draw for me has always been the view across Sutton Harbour from outside on the balcony that runs the length of the building.

From the corner of the balcony you get a cracking view of the harbour and as its a working port for the local trawlers, lots of activity with arrivals and departures.  For a city Centre pub, its surprising mellow and quiet most of the time, probably something the new owners are trying to change.  In the meantime, its a great place to drink coffee and while away the afternoon.

The National Aquarium is 100 yards away (as the bridge is still broken, you’ll have to go this way anyway) and the Barbican is roughly the same distance in the other direction.  Lots of parking on site, Oh and the Vue Cinema is nearby too. My thoughts exactly, what do I know about reviewing books!  Not a lot, but then who does?  I’m thinking I’ll give an opinion, have a look at what other people have said, say what its like and whether I’ve had fun reading it.  For the record, I get very excited about books, pretty much exclusively older Science Fiction, although I’ll mix in some odds and sods too.

It’ll take a while between instalments as I don’t get time to read as much as I’d like.  I’m keen to have a “reason” to read though, a lot of the time I’ll love a book (or hate one) and nobody else I speak to has heard of it.  Not a lot of room for strenuous debate there!  Also, as I read the same books repeatedly, it would be good to have a reason to put some more thought into the content rather than just wading through them.  A bit of thought and organisation, that’ll make a nice change!

As per the picture above, I am currently smitten with Stanislaw Lem, writer of “Solaris” and many others.  I will probably start with him as I’m in the middle of “Star Diaries” and the Voyages of Ijon Tichy, again. We went to see Yellow Submarine and Some Like It Hot, both crackers and as my co-pilot had not seen the latter, a real experience.

This year also had showing of The Piano, Dirty Dancing, Pan’s Labyrinth,
The Greatest Showman, The Shape of Water, Jaws, Isle of Dogs, Mamma Mia: Here We Go Again and Jurassic World: Fallen Kingdom but time got the better of us and we only made the two.  At £9.00 a ticket (£17 for VIPs, includes Prosecco!) it’s a great experience and a really good laugh.  You also get to wander around the Lido, which I hadn’t looked at before, its very 1960s!

I really can’t recommend this enough!  You sit in rows on either deckchairs (VIP) or fold out canvas seats (us), all very cosy and drink the wine, beer, coffee etc. which is available from the tent.  Its a really comfy atmosphere, everyone laughs at the funny bits and is quiet for the quiet bits.  They got the sound absolutely right, which had been a concern of mine before we got there, quite foolishly as it turned.  The area the screen is on is just below the roadway on the Hoe, but apart from the odd moped and boy-racer belting along, you really couldn’t hear anything apart from the film.  They’ve been doing this a while and they’ve really got it nailed, too loud and you’d be waiting for the next shock, too quiet and youd be straining to hear.  As it was, perfect.

The shows start at 9.15, just after the sun goes down, we got there at 8 for a wander round the place.  You get the views from the edge of the Lido across the Sound and that’s worth it on its own.

We had a warm evening for both shows, Some Like It Hot got a bit chilly but as it was the end of August, only to be expected.  They supply blankets for hire, we didn’t need them!

Keep an eye out on the Plymouth Arts Centre website – the tickets go quickly, although we were able to get them for the two night we wanted. Mount Edgcumbe sits across the water from Royal William Yard and there is a ferry (£1.50 at the moment, going up to £2.00 very soon) that takes you from “Admirals Hard” in four or five minutes to the House.  Living just a couple of hundred yards from the ferry is a bonus and I’ll quite often pop over to the pub for a pint overlooking the sea.   At low tide you can get down to the jetties and take in the urban beauty for a while.

If you like formal-ish gardens, the majority of the area will be for you.  I’ll be posting pictures every now and then, it genuinely is a different place at different times of the year, stunning.

The Orangery is a cracker, really really good food!  Well worth a visit, although I must admit I mainly pop there for a coffee if the suns out.  Years ago, I saw some Open Air Theatre here and they did the play (Midsummer Nights Dream – Illyria – if memory serves) up and down the staircases at the back. 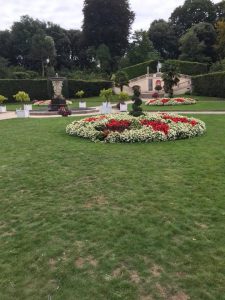 I managed to miss the Open Air Theatre this year, despite my best efforts.  See the post on Open Air Cinema at the Lido to see what it got swapped for.  Next year I’ll do both… 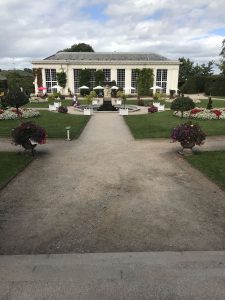 I do love Mount Edgcumbe and I am a regular on the ferry to and from there, its a great way to spend half a day just having a wander.  I haven’t been into the main house, that’s not really my thing.  I’ll post some more information and pics of the place when I have a chance and/or as the year progresses and the gardens change.